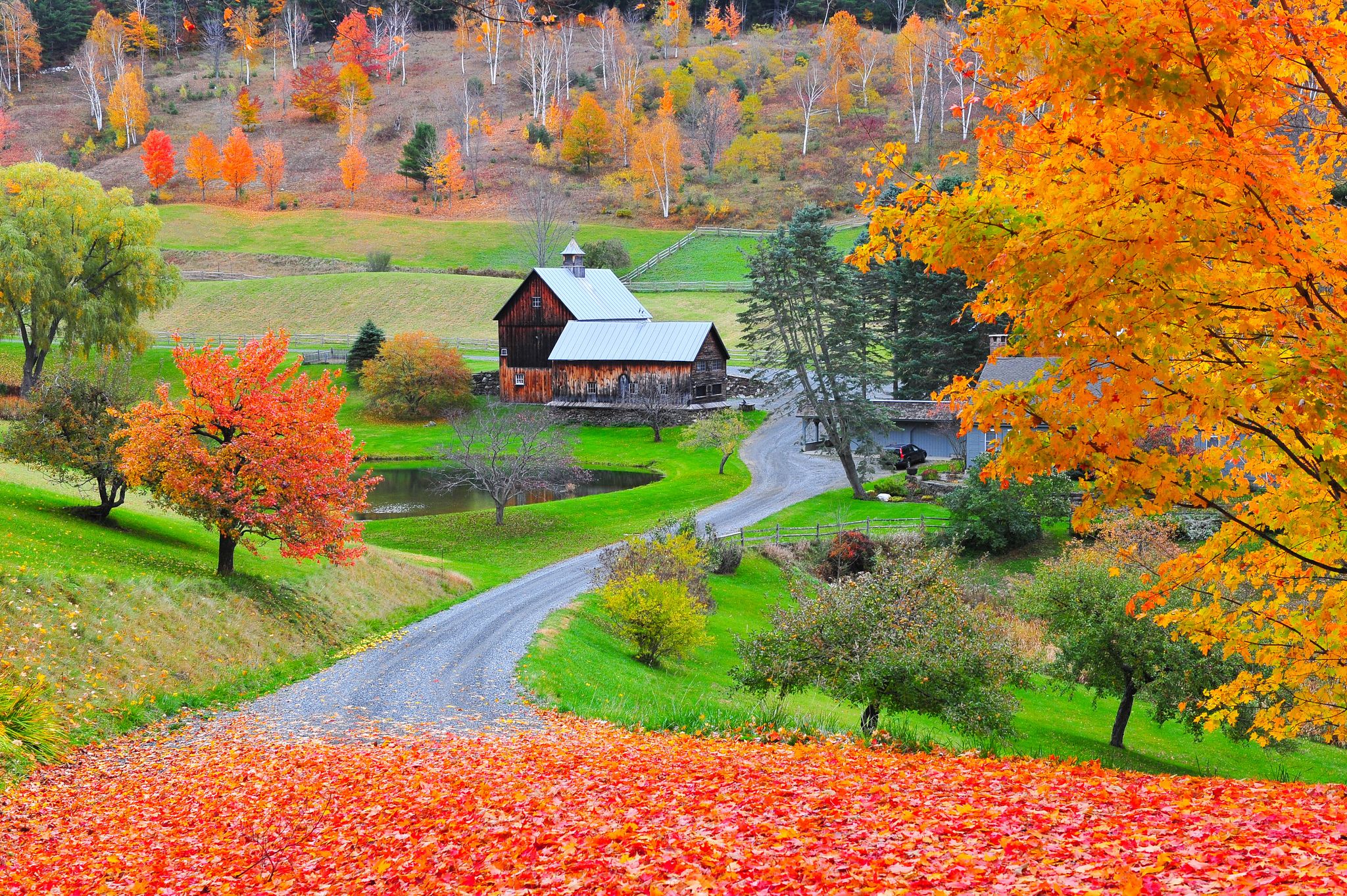 Colder weather has begun to set in across state as Autumn creeps in through Vermont’s Northern border, coating the entire state in shades of reds, oranges, and yellows. This combination of Vermont being home to the highest concentration of maple trees combined with the fact that 3/4th of the state is shrouded in forests equates to beautiful bursts of fall colors throughout the entire state. The change in color begins as early as mid-September, and from there, foliage enthusiasts are pursuant of the ever-elusive peak season, when the most vibrant range of colors are on display. Cold snaps at night and the recent rains have amplified this season. The peak seasons progresses from North to South and from higher elevations to lower elevations throughout the course of the season.

Whether you are exploring Vermont on a scenic byway, or taking in a picturesque autumn hike, everywhere you look is alive and erupting in color during the fall months. Festivals and activities that celebrate the season pop up throughout the entire state. Apple picking, vegetable harvests, farm visits, pumpkin patches, corn mazes and game hunting are among some of the most popular ways to enjoy the outdoors and take advantage of the panoramic fall surroundings. The Green Mountain State unanimously celebrates the changing season, and every part of the state has something to explore and discover. The question becomes what is the best way to experience Vermont’s Foliage, and what region reigns supreme for the most breathtaking fall landscapes. 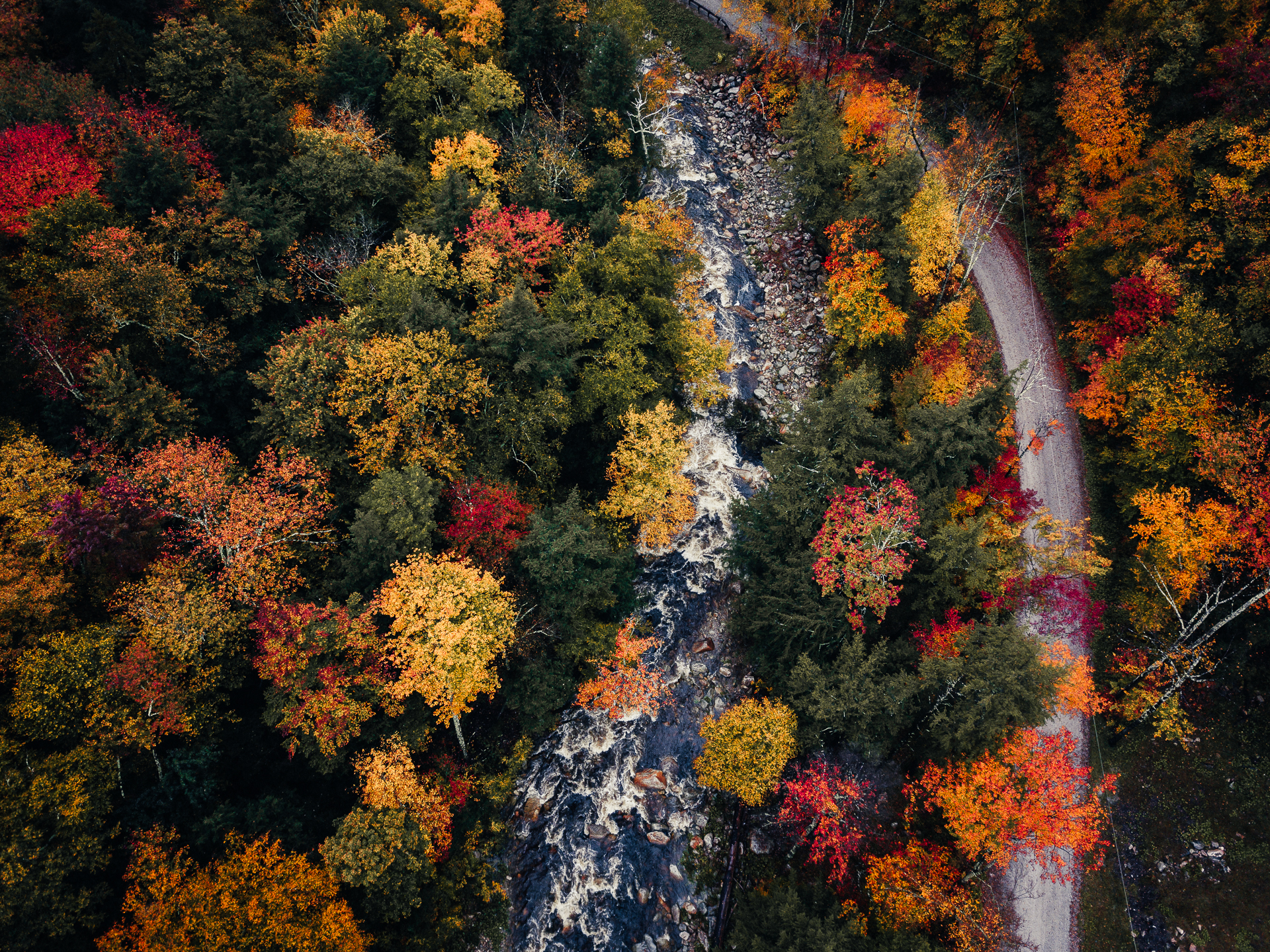 One of the most common ways to soak in the autumn scenery for out-of-staters is on the highways and byways crisscrossed throughout the state. The most well-known foliage drive is Route 100, also referred to as the “Skier’s Highway”. Route 100 is 146 miles of spectacular valleys and vistas that stretch from Massachusetts all the way up to the Canadian border, connecting North and South. It passes through the Green Mountains, as well as past several waterfalls and scenic bridges. Continuing North on Route 100, tourists will reach the Mad River Valley, which is a hidden autumnal treasure during the peak season in central Vermont. Route 100 will also lead to the Green Mountain Byway that offers a litany of scenic overlooks around Stowe, the Waterbury Reservoir, and peaks of the Worcester Mountain Range.

Drivers looking for an alternate route that’s little more off the beaten path can find beautiful scenery on Route 7, which stretches from Pownal at the Southern end of Vermont all the way up to Highgate near the Canadian Border in the North Country. Route 7 runs through majestic mountain views, brilliant foliage, and wonderful towns, including Bennington and Manchester. Each town Route 7 runs through has its own ambiance, and plenty of places for stopping and sightseeing along the way. Route 2 goes from East to West, from the Maine/Vermont Border, through Burlington, and into the divine fall colors on display in the Islands of Lake Champlain. 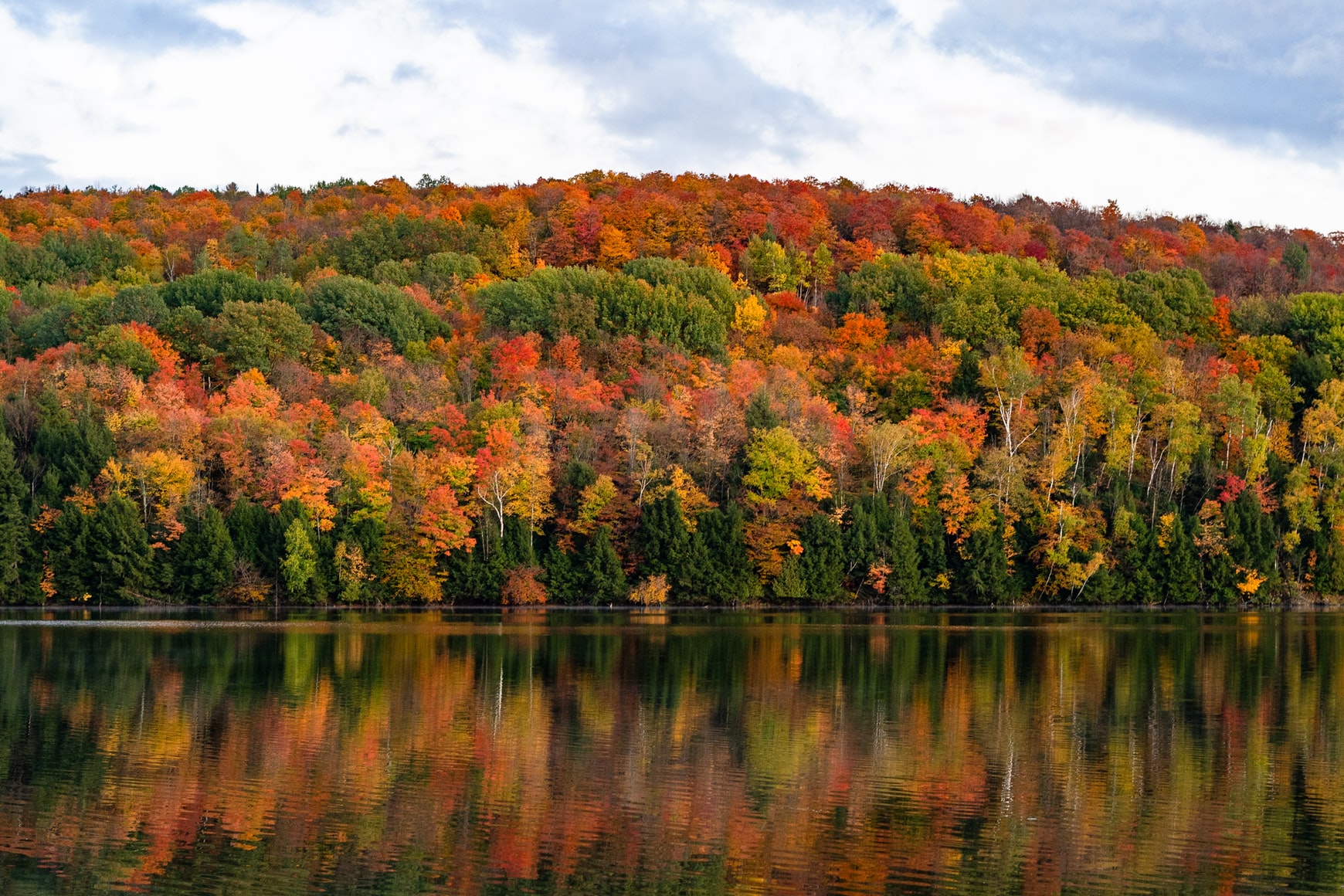 The Northeast Kingdom provides a good chance to enjoy the fall leaves without crowds. The remote area is commonly considered one of the most scenic areas in North America. The best time to see the collage of red’s, oranges, and yellows in the Green Mountains and Northern Vermont Runs from late September to Mid-October. Peak season usually falls on the last two weeks of September and the first week of October. Northern Vermont offers the opportunity to ride gondolas at Jay Peak and Stowe ski resorts and see the sprawl of colors from above. 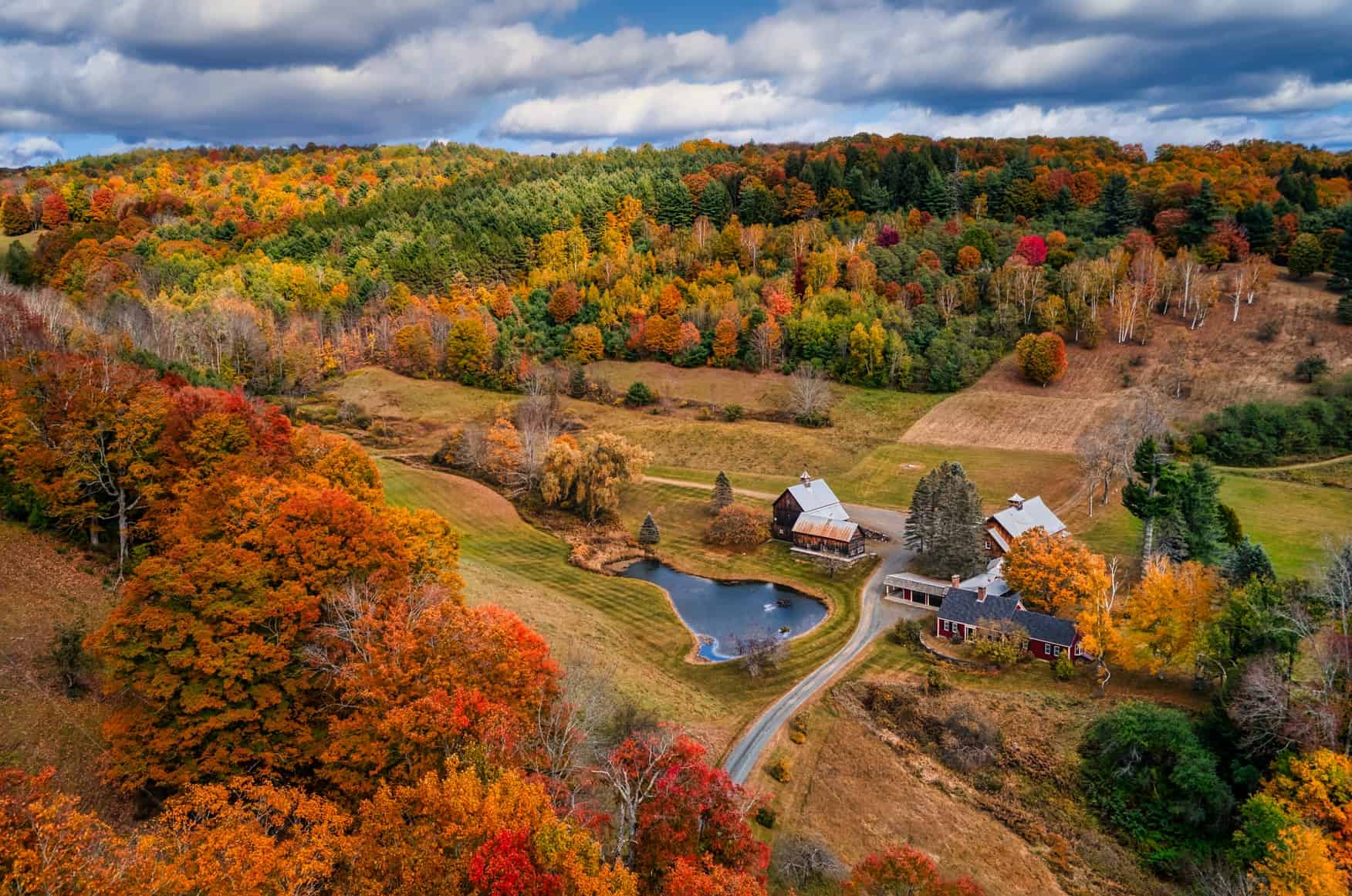 Ski resorts scattered across the entire state become hotbeds of activity for fans of Vermont’s foliage, Killington Mountain is one of the most sought-after destinations in Central Vermont. The Connecticut River Valley loop is one of the most popular and crowed roadways during peak season. The loop brings visitors through Woodstock, often regarded as one of the most beautiful towns in the United States, and fully equipped with miles of hiking and mountain biking trails, gardens, farms, rivers and meandering brooks throughout. Quechee Gorge and the Little Grand Canyon are also hidden gems to explore when experiencing the picturesque autumn in Central Vermont. Peak season at lower elevations and in a majority of Central Vermont usually takes place in Mid-October. 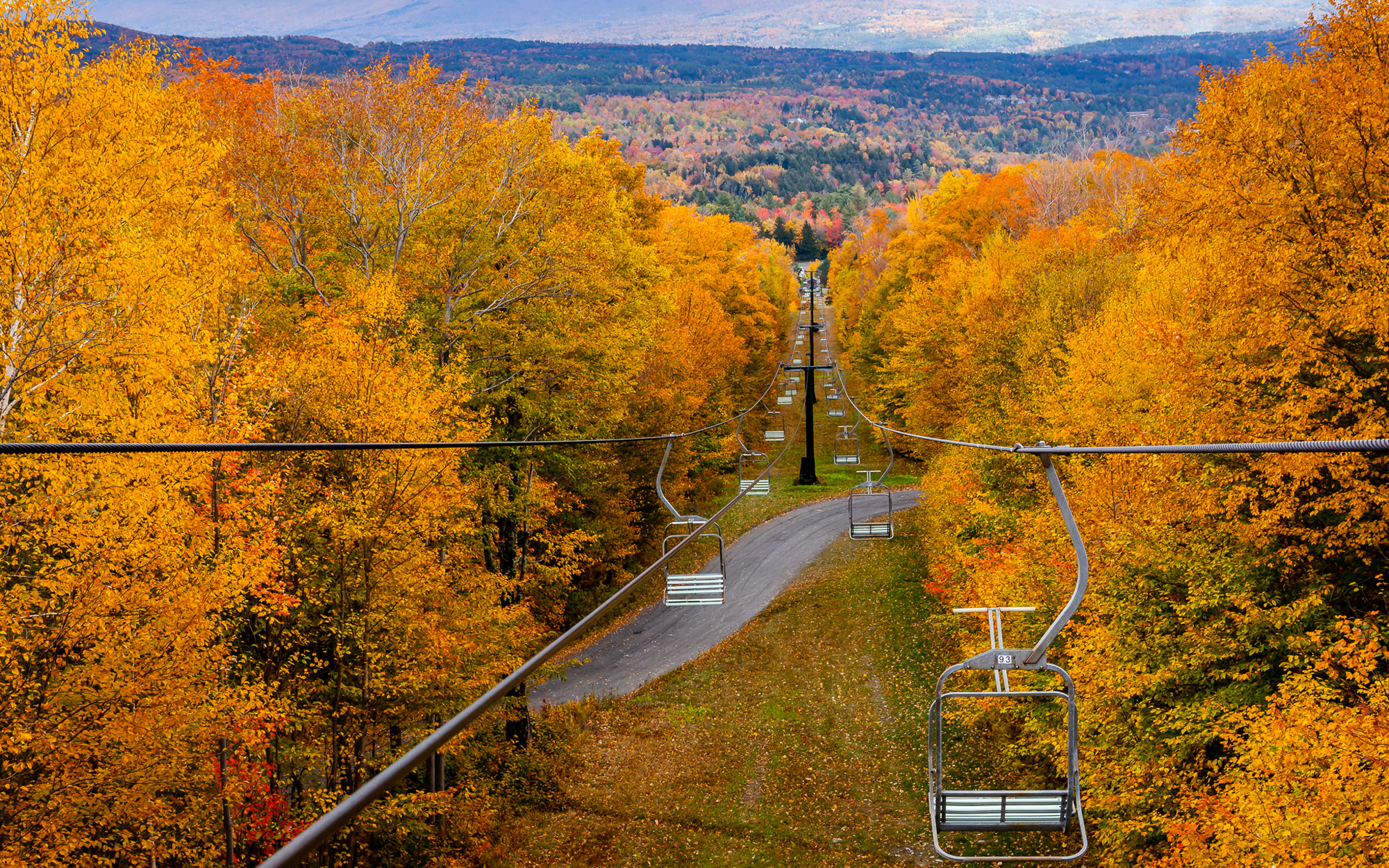 Traditionally the last region to succumb to the fall weather and the change in color that comes with it. Southern Vermont also usually faces the highest concentration of out of staters on the roads and overloading sleepy Vermont hamlets. Manchester is often at the top of tourists lists of must-see locales. However the highest point in Southern Vermont, Equinox Mountain is known for many excellent vistas, and expansive hiking trails. Bennington has also been a go-to for a glimpse of postcard fall views of New England. Mt. Snow is the most popular resorts in Southern Vermont and puts on an unbelievable display of colors that visitors can experience from above on a chairlift ride to the summit. Peak foliage season in Southern Vermont takes place in the middle two weeks of October.

As temperatures continue to cool down, enthusiasts need to be vigilant and pursue the evasive fall season as it makes its way down the state and early stages of winter begin to set in. Whatever your passion, Autumn in Vermont has something to offer for everyone, most of all one of the most charming times to experience everything the state has to offer. Wherever you get the chance to see the season, and however you chose to experience it. whether it’s a weekend trip, or just driving to work, autumn in Vermont leaves its impression on everyone who has the privilege to encounter it.